Rebuilding From A Fire 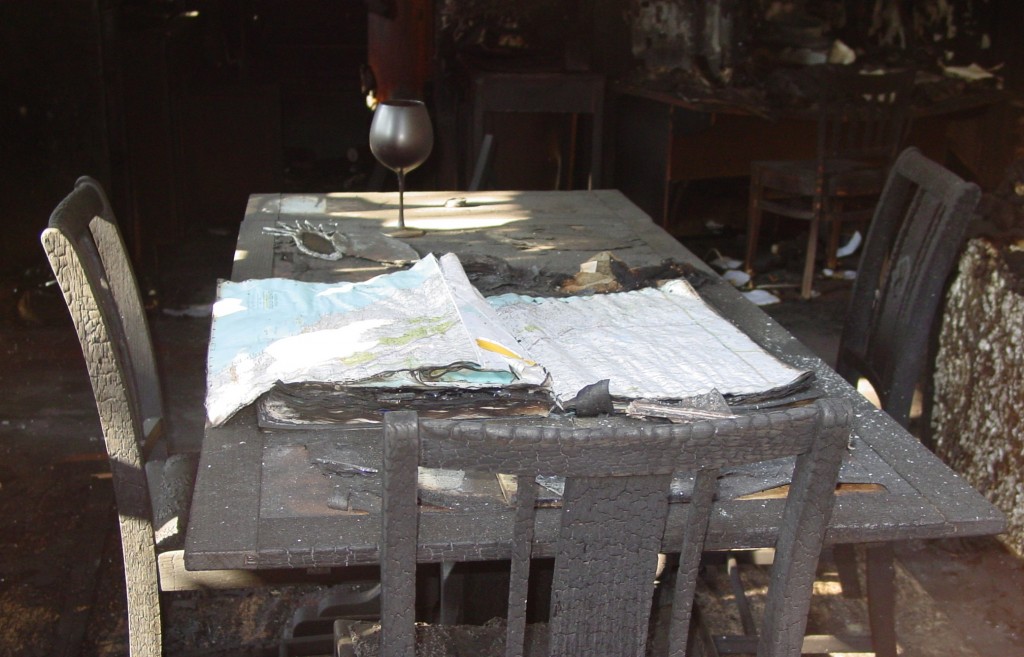 One day, driving around in 2002 looking for properties to renovate, my ex and I came up on a house that had burned. The front window was broken out. Ignoring his preference that I didn’t, I approached with my camera, and this is the picture I took.

I lost track of the file that stored this picture, but I never, ever forgot what I saw.

For years, I’ve wondered…what were they doing when this happened? Where were they when the place they called home caught on fire? I’d always imagined a couple, eating dinner, drinking wine, and planning where they’d go.

Today, when I found this picture again, I zoomed in on it to see if I could tell where they were going. And that’s when I realized…I’d always imagined a couple because that’s what I’d wanted to see. But there was only one wine glass on that table. This person was alone then, like I am now.

And my mind opened up, to the wondering again…

Was this a man? A woman? I decided for my own reasons, that this was a woman’s home. Did she ever go on the adventure that was likely being planned while enjoying that glass of wine? Or did the disruption the fire no doubt caused in her plans, damage her in a way that cancelled all the adventurous fun?

I think about my own life disruption two years ago, and how similar it was to this fire. Although I didn’t burn my physical house, I definitely started my “home” on fire. I poured the fuel everywhere because I couldn’t stand how I was living anymore. I did it because all the adventure in my life had stopped. I did it because without a fire in my heart, in my life, I knew I was slowly, painfully dying inside.

So I poured the fuel, and I quietly lit the match. Then I stood back, and I watched it burn fiercely and completely. I let the flames consume everything until my home and my life were barely recognizable. I see now that I didn’t do anything much to save my home or myself. I let it all burn, until I was sure it could never be salvaged or returned to, again.

And then I called for help from the ashes. It showed up, more than I could have imagined it would. At first, and at various times since, I’ve leaned hard on my friends. But then finally, from deep inside my own heart, I rose up, and began to rebuild, stronger and better than ever, on a foundation of all those lessons I’ve learned.

For sure, the fire in my life was scorching, scalding to the point of fearing I’d be consumed at times, too. But now, I’m designing my new life, laying the bricks, pouring the foundation, and enjoying the fresh air and the view. And, although my fire was destructive, I see that I needed it more than I even realized two years ago when I started it. From where I stand in this moment, I’m eternally grateful I started it.

How beautifully poignant that I found this picture, two years after my own consuming fire, right when I’ve seriously begun to rebuild and can see what my new “home” will look like.

I hope with all my heart that whomever lost the house in this picture found the kind of friends I found when my life burned. I hope she rose from the ashes and has happily rebuilt a new life in the way I’m doing now, too. I wish for her a warm fire in her belly, and a grateful heart for the lessons she has learned from the disruption this fire caused.

And more than anything, I dream she went on, and continues to go on, all kinds of adventures, with or without a map and a glass of wine.

That’s what I’m doing, now that I’m rebuilding from my fire.

This entry was posted in 21 And Done, Essay and tagged divorce, essay, fire, life, relationships. Bookmark the permalink.

2 Responses to Rebuilding From A Fire