Fast Eddie at the Flower Shop 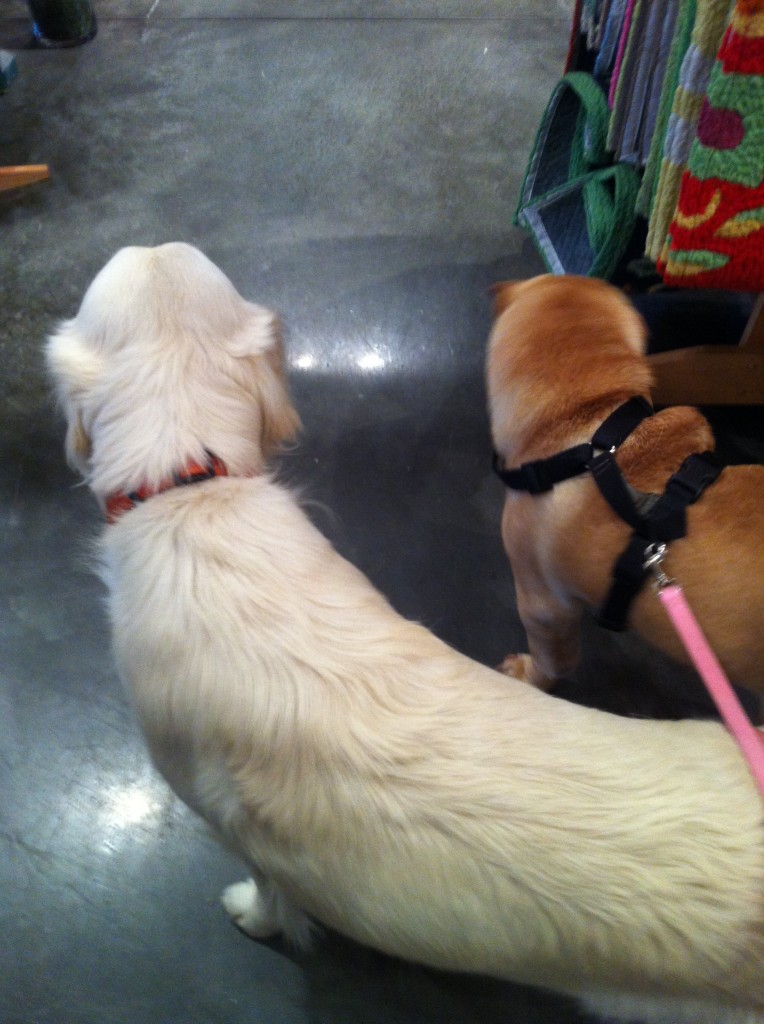 Poor Fast Eddie. She was unique and beautiful, and he fell in love immediately. You couldn’t miss that he had…he made no bones about it.

“Wanna have a ball?” He wagged enthusiastically, and showed her his bright green ball. But she? She didn’t want to play around. It just wasn’t her thing.

Not to be deterred, he dropped his ball and opted for another, more direct approach. He kissed her all over instead…and I mean ALL over. She allowed him to do it for a bit, but then began to pull away when she got overwhelmed, looking for higher ground.

In case she didn’t know how interested he was, he tried to hump her, before she could make her escape.

That’s where she drew the line, putting a stop to it. But she wasn’t mean about it. She looked up at me, knowing I’d come to her rescue.

I tried to explain to him that it wasn’t going to work. She lives in Austin, he lives in The Tundra, I reminded him.

He said, panting, “But it’s hot here now, hotter than there!” (Fast Eddie’s informed! He watches the Weather Channel at night with his owner.)

Ah, Eddie, right you are. It IS blazing hot. But that’s a temporary state of affairs, and in case you hadn’t noticed, she’s just not that into you.

You gotta admire his pluck. He ignored the truth of his situation as best as he could. He continued to pursue her, and obviously enjoyed what little time he had with her.

He even blew off his favorite treat, offered to him if ONLY he’d leave her alone, and come to the back of the store.

Eventually it was time for her to go. She was nonplussed and trotted willingly out the door.

But he pulled towards her as hard as he could. His sad puppy eyes watched her leave, while he still wagged hopefully.

His fuzzy head was full of dreams that she’d change her mind and stay behind.

She’s on her way now, exhausted from fending him off. She’s already gone to sleep quite contentedly, snoring gently in the front seat of the car.

I wonder if poor Eddie’s heart has recovered yet, or if he’s going to hang onto the scent of her until the moment another pretty puppy inevitably walks in the door of Fast Eddie’s Flower Shop.

This entry was posted in Essay and tagged dogs, love, relationship, romance. Bookmark the permalink.

6 Responses to Fast Eddie at the Flower Shop